GHasetten is our nation’s newspaper. It’s made by members for members.  It comes out twice per semester and it gets delivered directly to your home, but by e-mail if you want to. Two chief editors are chosen by the Landskap for a period of one year. During that time they are responsible for making sure the paper is always released on time. Sveva is the current solely chief editor right now, interested? Contavt nation’s First curator! . The First curator is also the head publisher.

GHasetten has no regular redaction so every issue is created by a different set of volunteer writers. Everyone who is interested in joining that group is welcome to do so as we always look for new authors. If you like to write, photograph, edit or do anything else you think could be useful please contact our chief editors at ghasetten@gmail.com. Before every issue of Ghasetten, the chief editors organize a meeting during which everyone can juggle their ideas and divide the necessary work. You can come to share what you want to do or to perhaps make someone else’s concepts a reality. If you already prepared something you can just email it to our chief editors.

There are some constant elements to GHasetten. The magazine is always opened by a Curator Column in which the current full time employees greet all the members, describe what’s currently going on at the nation and what is scheduled for the near future.  The paper is also tasked with introducing newly elected curators and describing the ongoing and past nation events such as gasques and balls. Other than that, GHasetten also writes about the nation’s honorary members, club workers, and the Inspector. It also prints messages from the nation’s different board or committees, recce secretaries, international secretaries and other functionaries. GHasetten is also the official outlet for releasing scholarship information and the summons to the Landskap which takes place twice per semester.

In the beginning of each semester Recetten is released to all the newly signed nation members. It’s a special version of Ghasetten also created by our chief editors and some of the volunteers. In Recetten you can read a bit about the nation and its history. In the Curator Column all the Qs introduce themselves, describe their work and welcome all the new members. Our editors need help with Recetten as much as with the regular Ghasetten so if you want to help them out, contact them at the previously mentioned email.

Ghasetten and Recetten do not contain any materials that could be counted as religious or political opinions. Other than that you can write about whatever comes to your mind. Usually the paper is filled with articles about Uppsala, student life and our nation but those topics aren’t an entry requirement and we love to see your creativity at work.

If you are interested or even just curious contact us at ghasetten@gmail.com or talk to 1Q.
We want you! 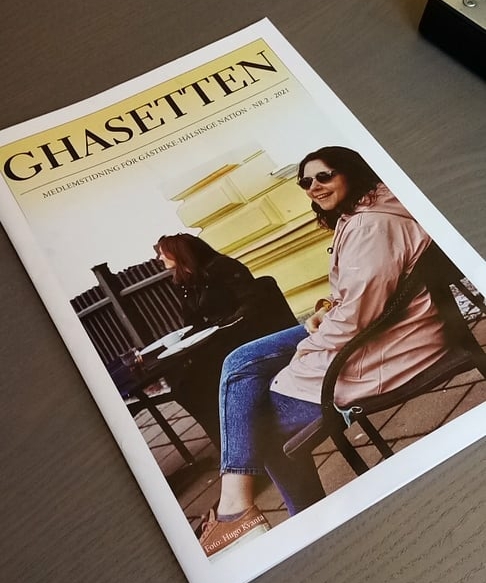